Skip to content
HomeFlorence Nightengale and the Sisters of Armed Conflict

In 1910 Florence Nightingale died. In her last will and testament, Nightingale bequeathed $1,500 [$40,000 in current values] to Sister of Mercy Mother Stanislaus of the Hospital of St. John and St. Elizabeth along with all her Catholic books in French and English.   She left the same amount of money to the Reverend Mother of the Sisters of Mercy at Devonport, England.

Nightingale: The Founder of Modern Nursing

Nightingale is credited with being the founder of modern nursing.  Her saga began in 1854 when reports filtered back to Great Britain about the horrible conditions of the wounded during the Crimean War (1853-56).   It was a war that pitted the Russian Empire against a combined allied coalition of Great Britain, France, the Ottoman Empire and the Kingdom of Sardinia. Russia lost the conflict.

Nightingale organized an expedition of 38 volunteer nurses whom she trained along with 15 Catholic nuns.   This small cadre of women oversaw the implementation of modern nursing standards and they are credited with the reduction of the death rate among the wounded soldiers they treated from 42% to 2%.

The Nightingale bequest to the nuns likely prompted Ellen Ryan Jolly, President of the Ladies Auxiliary of the Ancient Order of the Hibernians to start an appeal for funds for a memorial for the American Catholic nuns.   Approximately two thousand American nuns performed similar services during the Civil War.  Jolly reasoned that numerous memorials had been erected to soldiers and officers but no one remembered the contribution of Catholic nuns on the battlefields of the Civil War.

Jolly, in a 1914 public letter published in Minneapolis’ Irish Standard, noted “the sisters left their quiet convent for the field of battle, and their tenderness and sweetest womanly sympathy have been the admiration of even Protestant gentlemen who were eyewitnesses of sacrifices…[the nuns] knew no North or South; blue and gray shared their attention alike.”   She decried the fact that while Clara Barton, Florence Willard and Mary Livermore were honored for their contributions such recognition was denied the Catholic battlefield angels “whose very identity was concealed by their religious name.”

Besides aiding the wounded, dying and dead on the battlefield and in field hospitals, the nuns, Jolly related, wrote the “last and loving message to wife, sister, and mother.”  They also made efforts to ensure a dead soldier’s last grave would be located near his home.  It was these nuns “whose heart bled in sympathy for the poor soldier breathing his last,” asserted Jolly.  The various orders of sisters who served included the Sisters of the Holy Cross; the Corvette and Emmetsburg Sisters of Charity; the Sisters of Nazareth; Mother Seton’s ‘black caps;” the Sisters of St. Joseph; and the Sisters of Mercy.

Ellen Ryan Jolly Vowed To Raise Money For a Memorial

Jolly vowed that the Ancient Order of Hibernians would raise $45,000 to erect a fitting memorial at Arlington National Cemetery.   America’s then-sole Cardinal, James Gibbons, immediately endorsed the cause of these women whose efforts he wrote  “lessened, to some degree, the horrors of war…[by comforting] the dying, assisted the wounded and the crippled, cared for the sick and convalescent, comforted their families, and in this way shed on ten thousand beloved homes a solitary ray of consolation.”

It was just a matter of months before legislation was introduced to assist Jolly to erect a fitting memorial at Arlington.    The War Department denied Jolly’s request that the memorial be placed at Arlington National Cemetery because “the nuns were not in the military service…and refused to establish a precedent.”  Jolly countered that the nun’s service “was unique and useful as it was rare and exalted.”  She added that there were numerous government telegrams “asking for [nun]  nurses for the wounded…their labors were continuous and incessant…[in one instance] President Lincoln [visited them] and spent some time with them, complimented them on the order and cleanliness [of a military hospital and] the comfort and relief they had given the wounded.”

She pointed out that Sister Mary Consolata Conlon, aged 20, died of typhoid while treating the disease at the Union’s Point Lookout prisoner of war camp.  Sister Mary Gonzaga and forty nuns, Jolly recalled, took over control of Philadelphia’s Saterlee Military Hospital and cared for 50,000 Union and Confederate soldiers in three years.  On the Confederate side, nine Sisters of Mercy aided the military hospitals of North Carolina, Alabama, and Mississippi.  The nuns, Jolly noted: “Rendered their services impartially to both sides.”  She also recalled the oversight when the 50th anniversary of Gettysburg “ignored and seemingly forgot [the nuns]… [and such an oversight was] a dark blot on the escutcheon of those in authority.”

In 1916 the American Federation of Catholic Societies continued the campaign for an Arlington memorial, debunking the War Department claim that the nuns weren’t in government service.  The Federation highlighted that ten nuns were on the “pension roll” of the government which “proves . . . that they were in the service.”  They also produced a letter signed by Abraham Lincoln authorizing the Sisters of Mercy “to purchase and charge to” the War Department any provisions required at the Washington, D. C. Military Hospital.

By 1919 it was apparent that Arlington was out of the question, but an agreeable site was found across the street from the District of Columbia’s St. Matthews Catholic Church.  The War Department agreed to provide over 2,000 grave markers for nuns who served as nurses during the Civil War.  At the time several of the nuns were still living—e.g., out of 93 Holy Cross nuns who served, six were still alive.  The War Department also agreed to provide markers for the Ursuline Order of New Orleans for their nursing skills during the War of 1812.

The Battlefield Nuns Memorial was dedicated on September 20, 1924.  One attendee, Sister Magdalene of the Sisters of Mercy “a Civil War vet was received with thunderous applause” by the 5,000 who attended the ceremony. 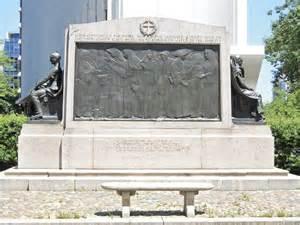 In his 2016 article in Catholic Stand on the same subject, Donald McClarey noted that prior to the Civil War there was a high degree of anti-Catholicism which seems to have lingered a bit after the war despite the heroic deeds of these battlefield nuns.

The Nun on the Battlefield

An Incident of the Franco-Prussian War of 1870

Dead on the corpse-strewn battle plain,

Where war’s dread works is done.

She lies, amid the heaps of slain,

The pure and holy nun.

She saw the stricken soldier fall,

And, ere the strife was over,

She rushed, unheeding blade or ball,

To staunch his flowing gore;

To gently raise his falling head,

To cool his lips of flame,

To whisper, ere his spirit fled,

And on from one to one pass,

Midst those who, living yet,

Lay groaning on the crimson grass

Their streaming blood had wet;

With saintly love and tenderness

Their suffering hearts to aid—

Through which their wounds were made,

And in whatever form of speech

They prayed to God above—

Unto their dying lips to reach

The emblem of His love.

But, ah! The battles thundering swell

Had not rolled far away;

And still the murdering missile fell

Where the dead and dying lay;

Huge shots tore up the ground,

She flinched not when they hurried past,

Nor turned her head aside.

But when her own death came at last

She blessed her God and died.

Reprinted with permission from the author.